Using the Rule of Space in Photography 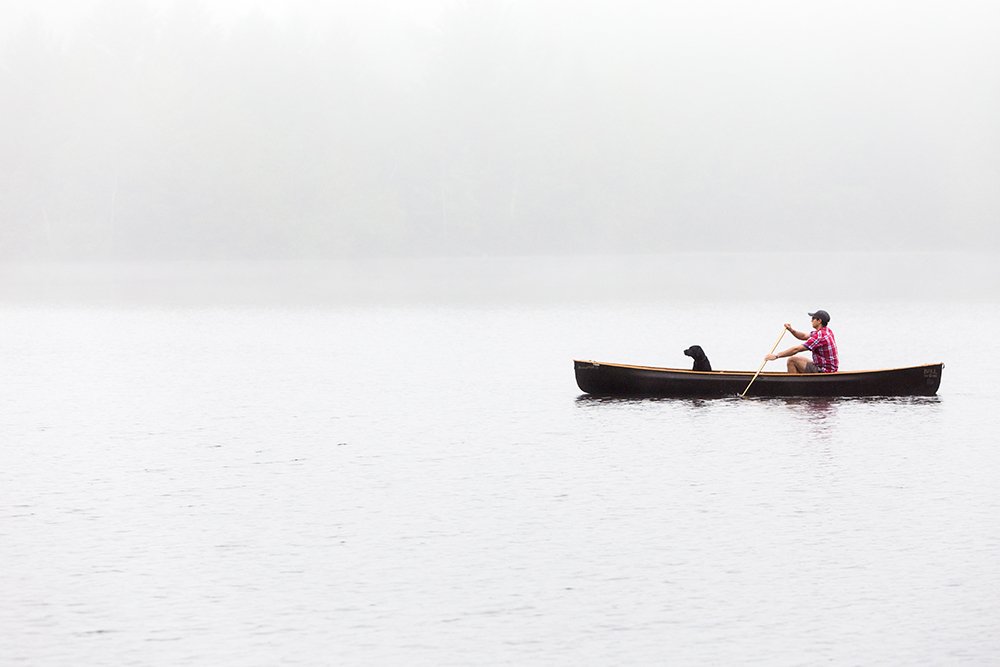 Ever heard of the rule of space in photography?  Possibly not.  But it is such an important rule to learn.

Have you ever been shooting and wondered to yourself, “where should I place the subject in this image?”  This conundrum is where the rule of space comes into play.  The rule of space in photography will help you know just where to place your subject.

What is the Rule of Space in Photography?

The rule of space in photography is simply the act of adding visual space in front of the direction that an object is moving, looking or pointing to imply motion and direction and to lead the eye of the viewer.

Take a look at the image below.  The cat is placed on the right side of the image because of the rule of space. 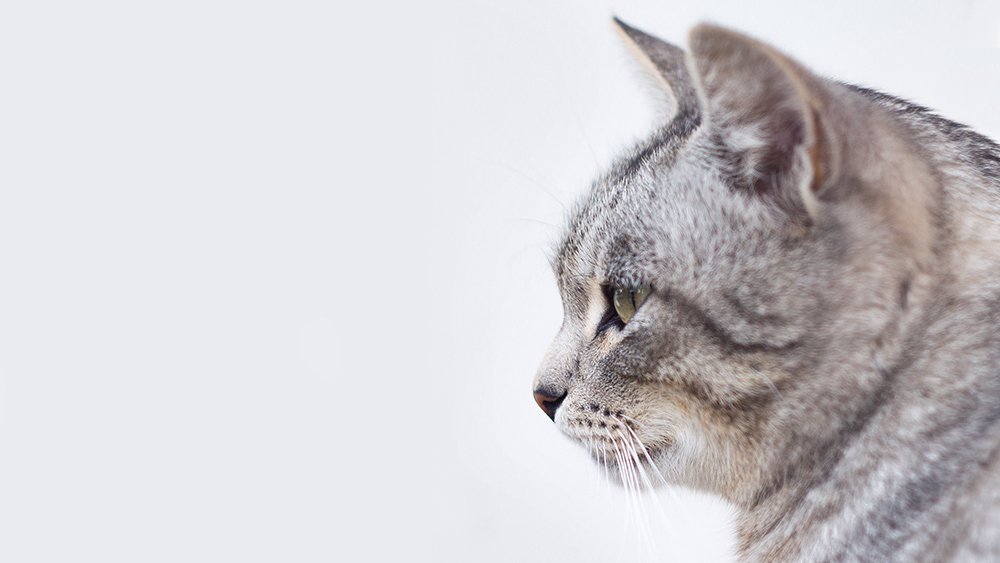 Look at the image again, and think about where you look first.  You looked at the cat.  Where did you look second?  Most likely, you looked in the direction that cat was looking to see what he was looking at, and because nothing is there, your eye gravitated back to the cat.

This is how the human brain works.  And knowing this gives the photographer immense power on how to compose an image and where to place the subject in the image for maximum interest.

Take a look at this image of the deer below. 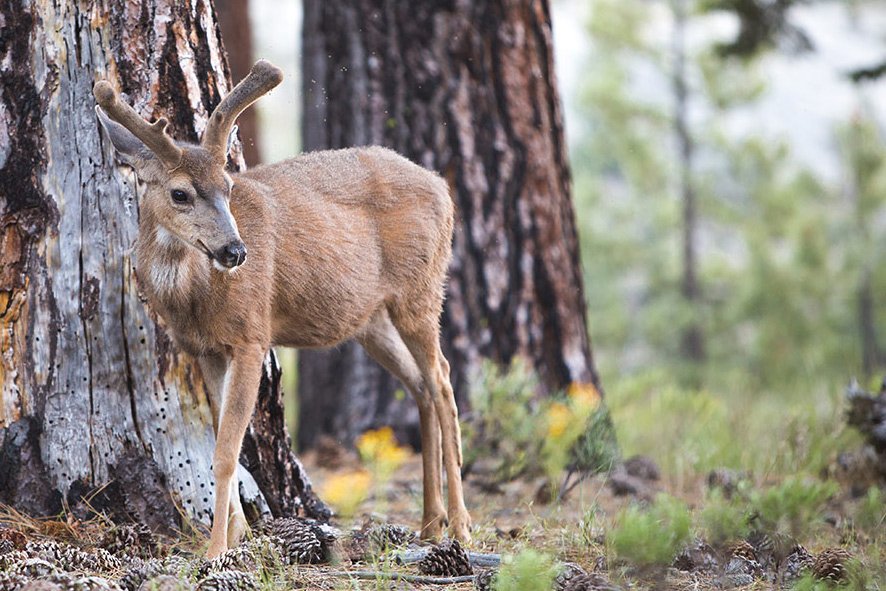 This image might seem to defy the rule of space, as the deer is pointing to the left and the deer is on the left.  However, it is the eyes that matter most when your subject has eyes.  Where are those pointed?

Once again, the definition is this: the rule of space in photography is simply the act of adding visual space in front of the direction that an object is moving, looking or pointing to imply motion and direction and to lead the eye of the viewer.

The Rule of Space adds a Feeling of Motion or Action

Take a look at the two images below. Which image follows the rule of space in photography? 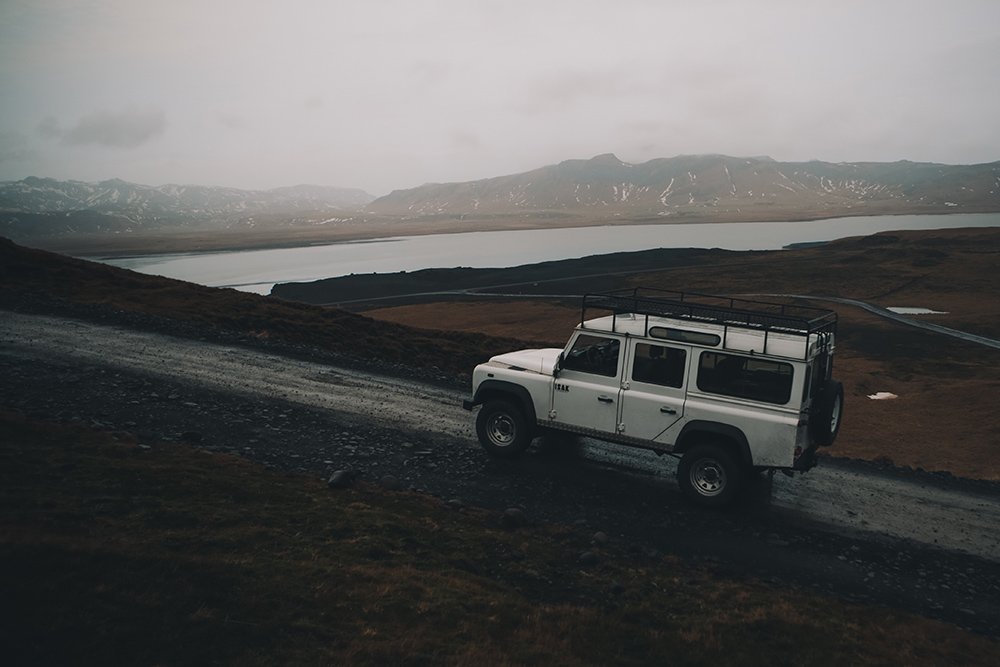 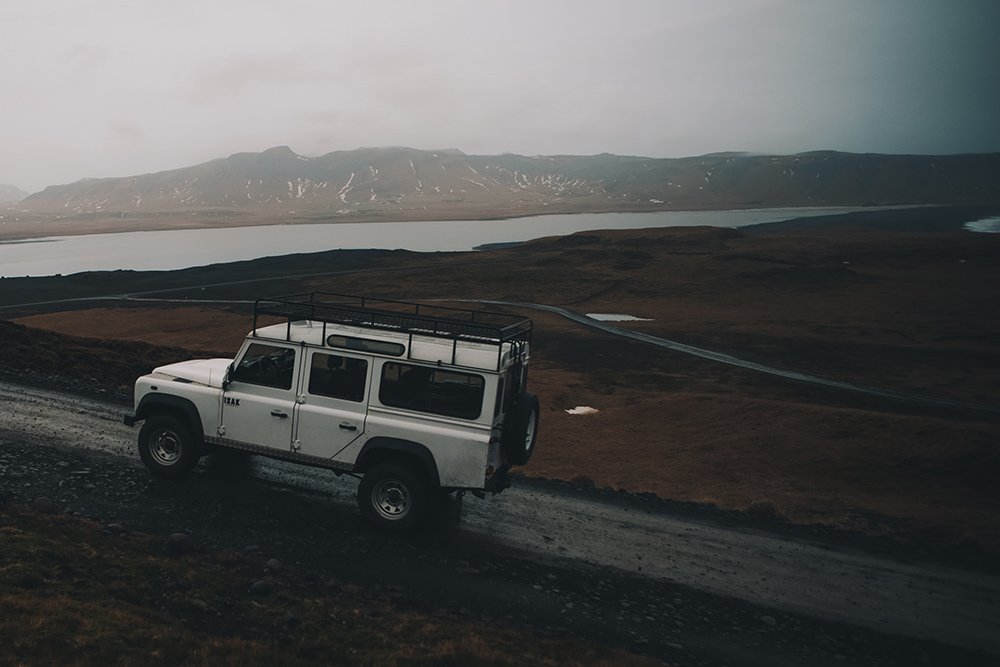 By placing space in front of a moving object, you give a feeling of motion and direction.  And as a bonus, you lead the viewer’s eye into your image..

The Rule of Space in Photography Combines with other Compositional Rules

Something to remember, is that for an image to be compositionally sound, you need to use the rule of space along with other rules of composition such as the rule of thirds or the rule of balance.

Think of the rule of space not as a full-fledged rule of composition, but a rule that helps you know where to place your subject in an image to create a visually pleasing image and to lead the viewer’s eye in the direction you want it to go.

The image below of the dog follows the rule of thirds but does not follow the rule of balance. Even though the balance is off, the image remains compositionally strong because of the rule of space. 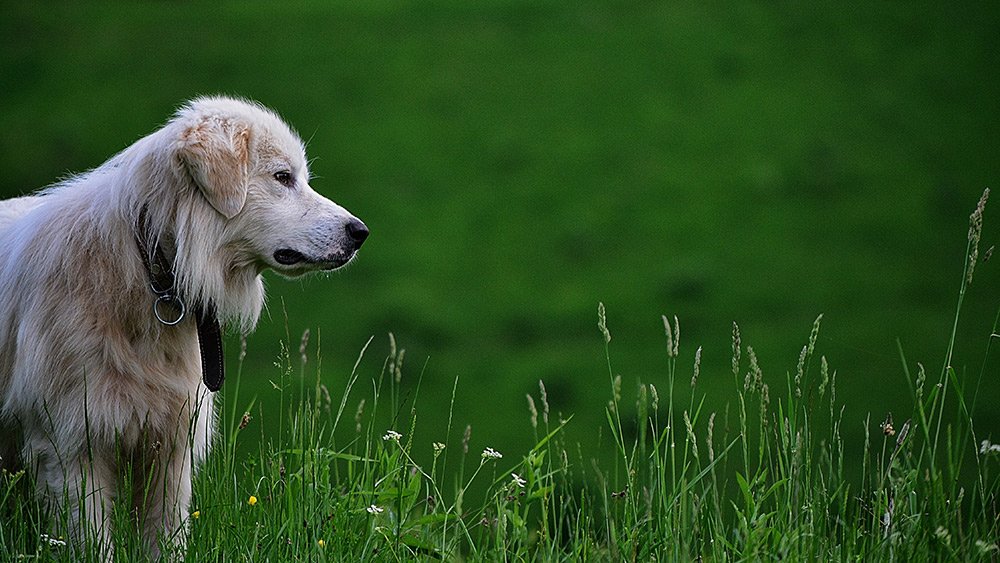 The viewer’s eye enters the image at the dog, then follows his eyes into the open space of the image. There is nothing there, which causes the mind to wonder, what is he doing? What is he looking at?

This space forces the viewer to begin to fill in the blank, or tell the story. Energy is created as the viewer imagines what the dog is looking at.

Remove the dog, and replace him with an inanimate object, like a fire hydrant, and the image is no longer compositionally strong. Now it is simply, a poorly composed image of a fire hydrant. 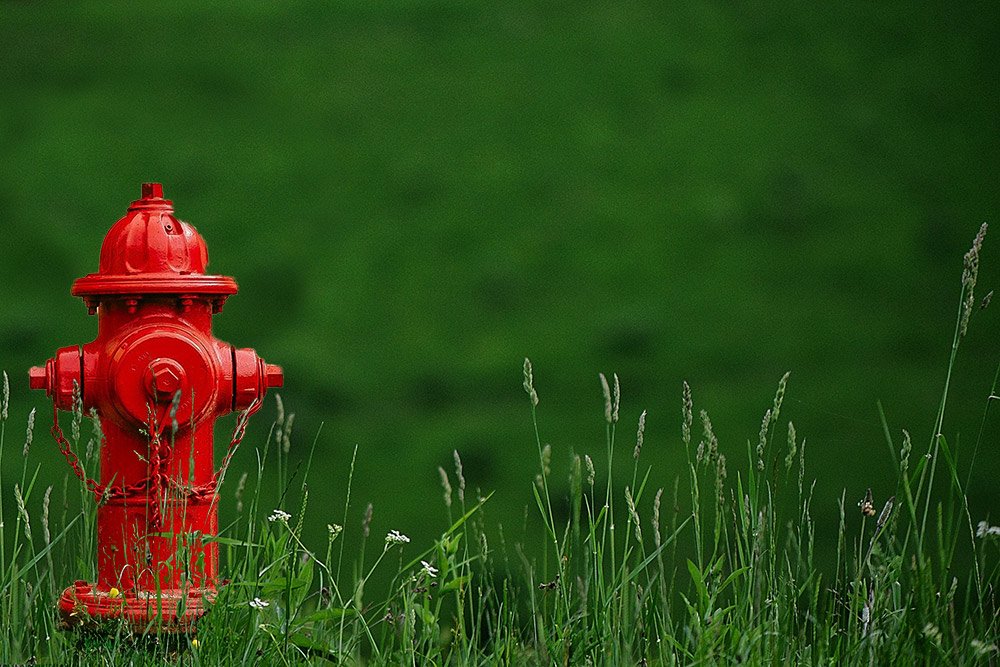 The Rule of Space in Photography Helps Tell the Story 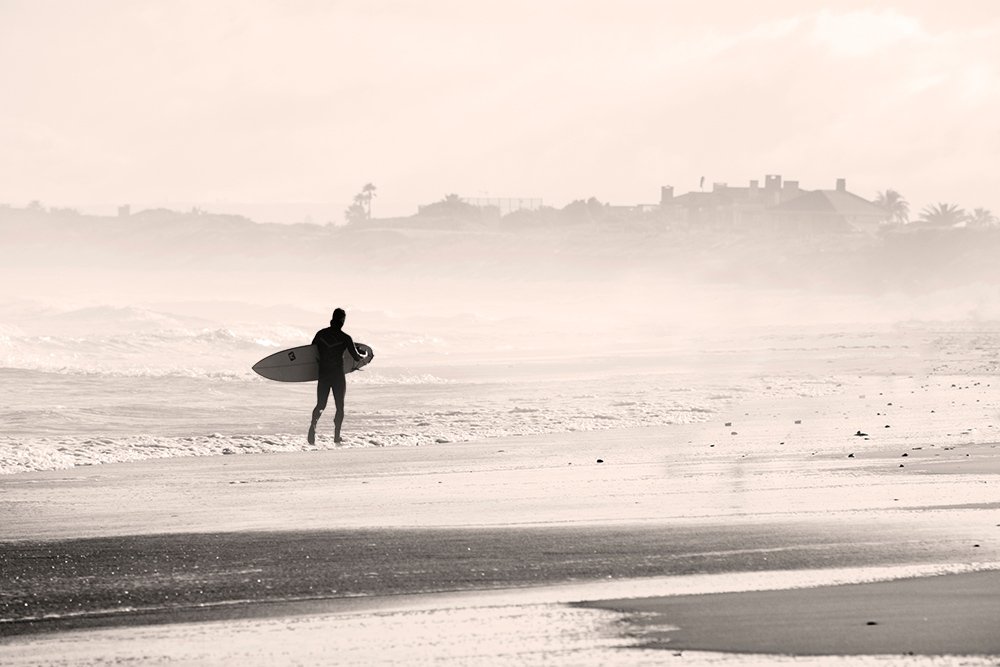 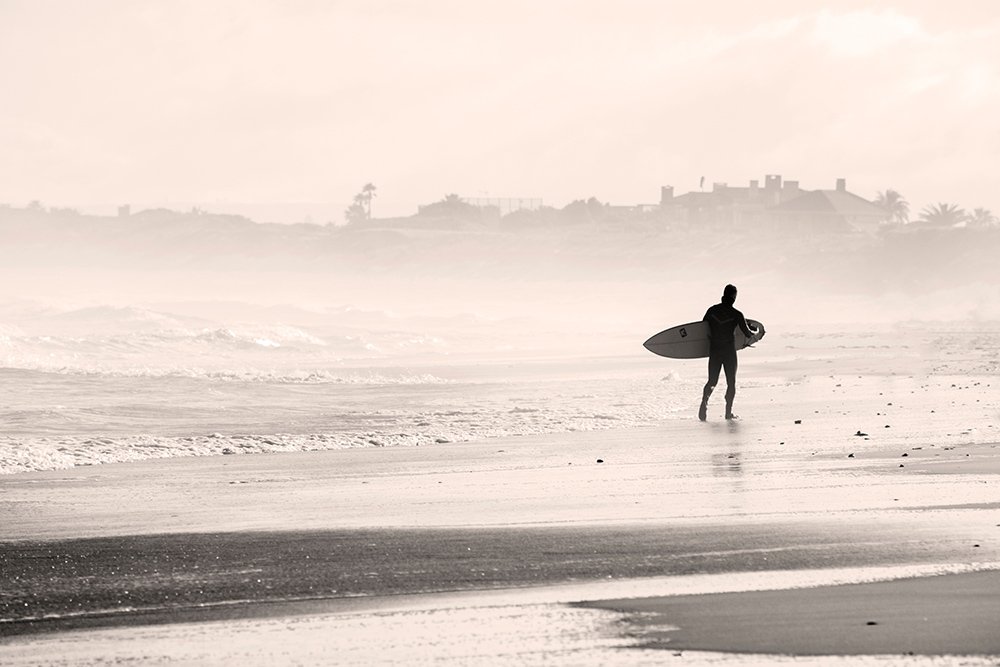 As yourself these questions below:

What about the two images below.  Which do you feel is a stronger composition? 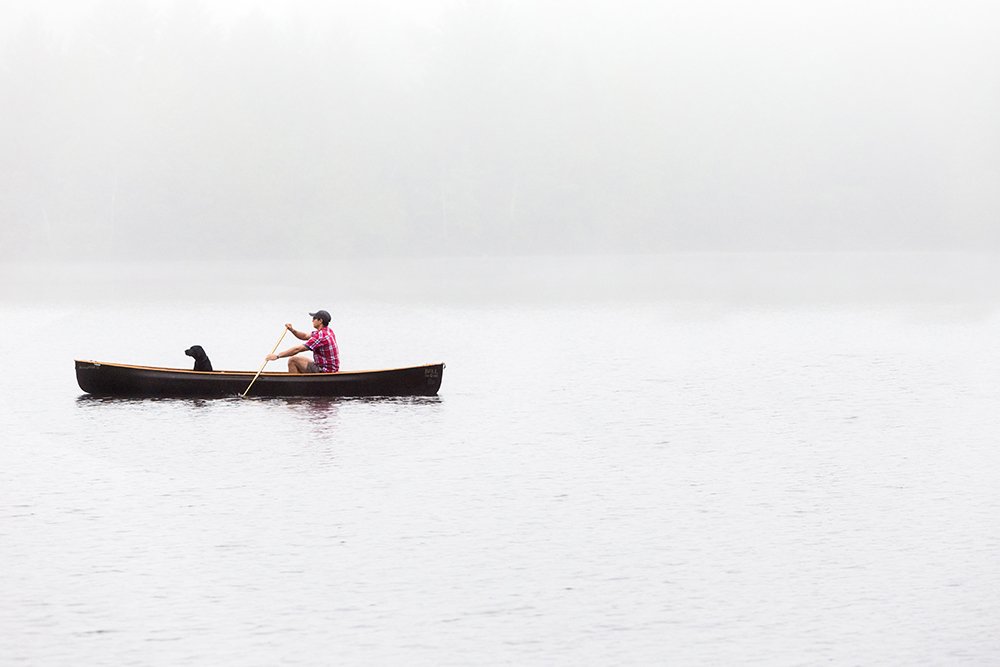 As humans, we tend to look at the eyes of the subject first and then in the direction the eyes are pointed.  As a photographer, this can be to our advantage. It gives us the ability to lead the eyes of the viewer around the image in a very specific way.

Take a look at this photograph. Take a mental note of where your eyes enter the image, where they move second, third and so on.  Let’s see if I can predict how your eye will move around this picture. 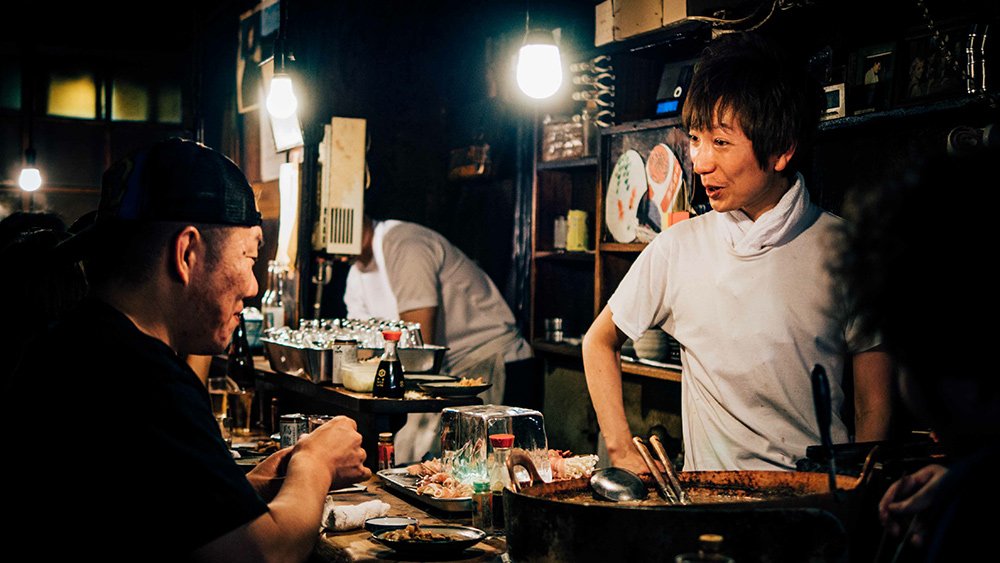 Did you do it?

Let me try to predict how you moved around this image.

Most viewers will enter the image at the woman standing up, then follow her eyes to the person with whom she is talking. Next, the viewer will move to the other individuals in the image and finally to the environment.

Take a look at the image below to see if this is how your eyes moved around the image. 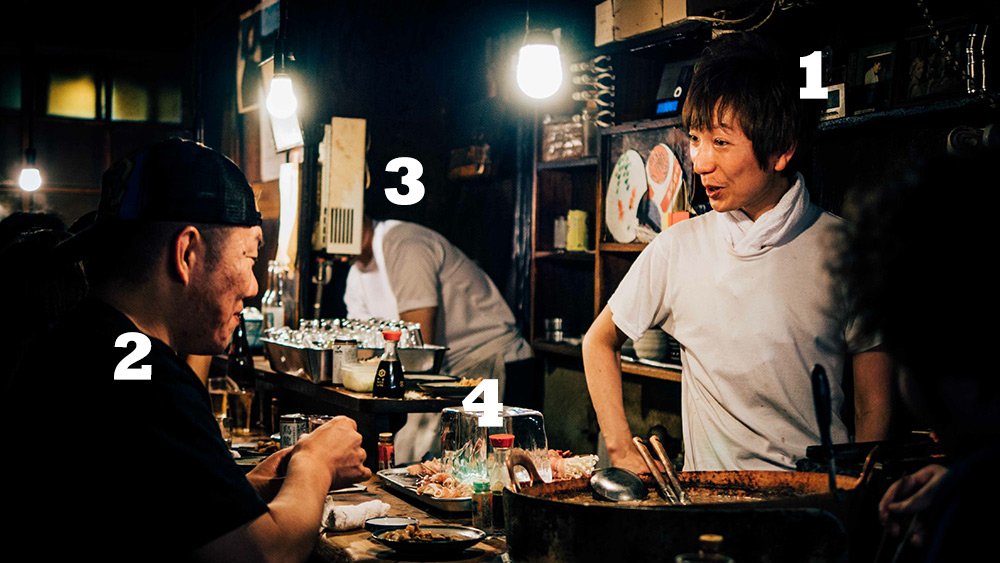 Is this how it was for you?

Let’s do it again with the image below.  Take a mental note of where your eyes enter the image, where they move second, then third and so on. 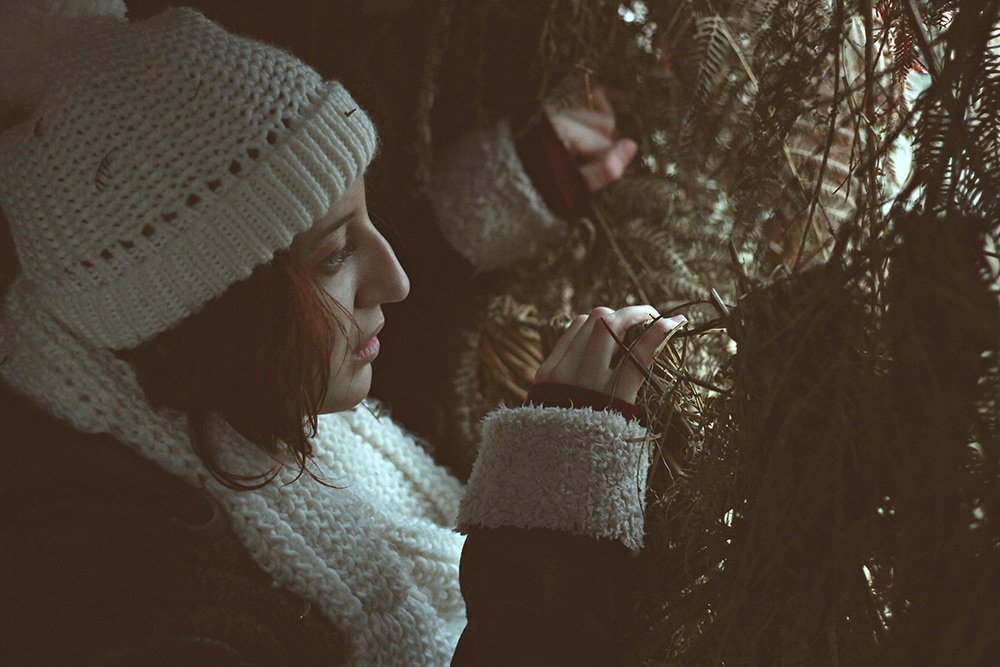 Where did your eyes first enter the image?

Where did your eyes move next?

Most viewers will start with her face and move next, to where she is looking.  The eyes will then come back to her. The reason for this is because our brains are trying to get more information.

We want to know what she is looking at, and by understanding the other visual clues, we may be able to figure it out.

Once back to her, the viewer will go to her hands to determine what she is doing, and finally, begin to notice the details of the image, like how she is dressed and what she is peering through. 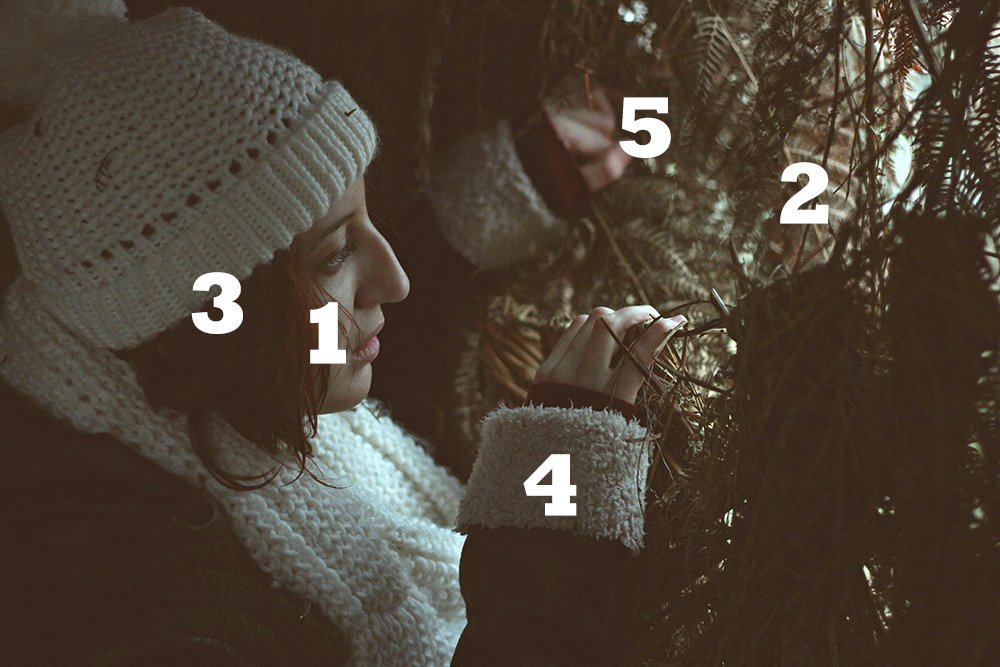 As a photographer, this knowledge can be powerful when creating images.

You now, not only control all the aspects of the picture but control where the viewer will enter the image and the direction their eyes will move.

This enables you to tell a story with your image, in the exact order you want it told.

These next few images give you examples of how using the rule of space in photography can lead the viewer through an image. 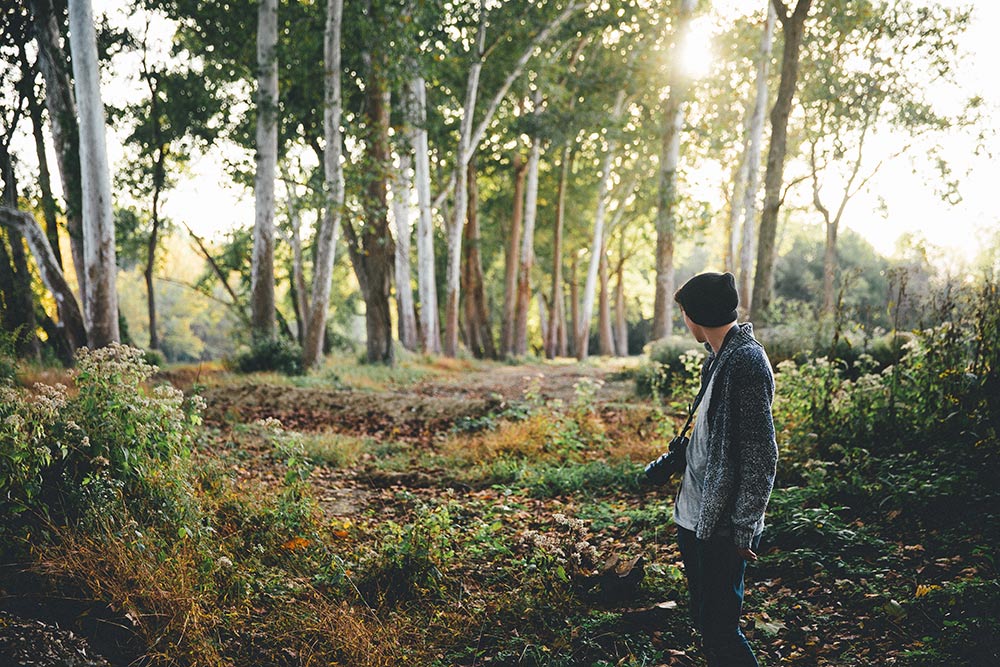 Wondering what he is looking at?  What does he want to photograph?  Is it intriguing to have him looking back over his shoulder?  Notice how this image causes you to think. 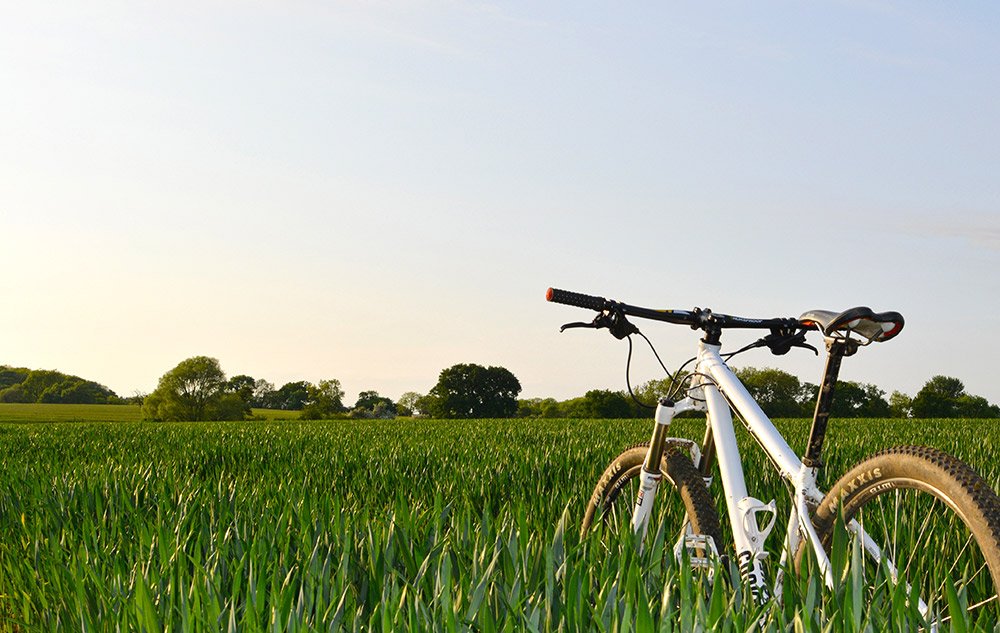 Bike in a field?  Odd.  But the placement of the bike and the direction that it is facing leads your eye into the image.

The image below is a more complex picture.  Take a look at it take note of how your eye moves around the photograph. 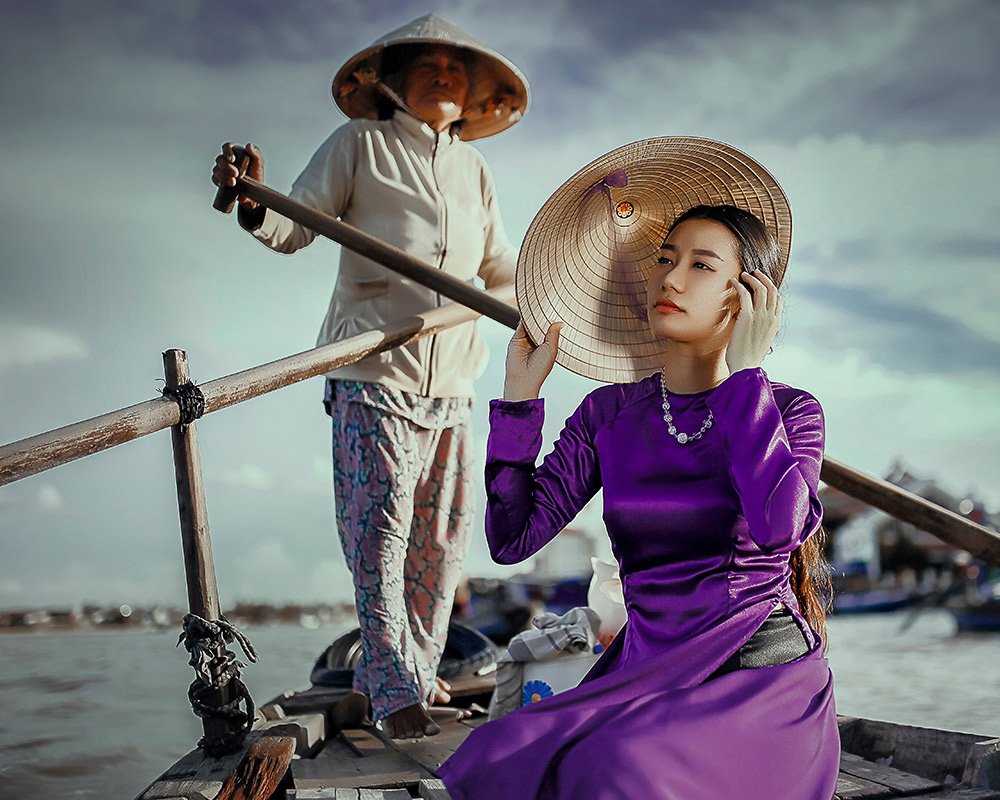 The woman is of course the subject of the image, and the direction of her eyes leads us into the picture.  The sharp lines created by the oars lead us to the oarsman and then back to her.  No matter where you look in this image, the strong lines and darker colors always bring your eye back to her.

Take a look at the image below and pay attention to where your eye enters and moves as you look at the picture. 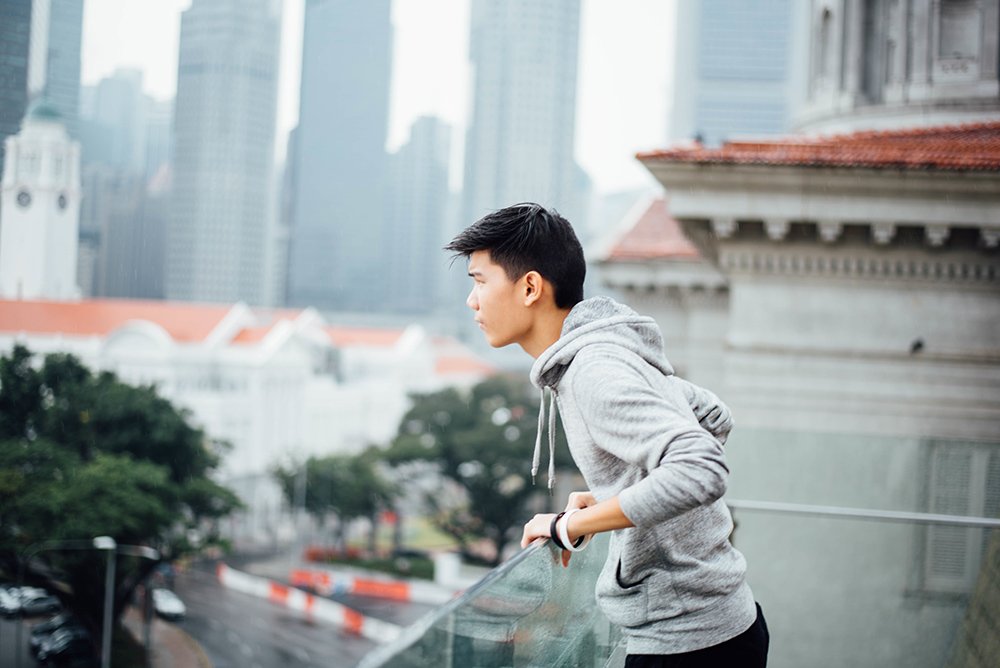 In this image, don’t you wonder what he is looking at?  This thought causes the viewer to follow his eyes and look into the image.  The color in the roof and the buildings in the background brings your eye back to him.  The area directly behind him is pretty basic, so your eye won’t linger there long, and if it does, the lines and color of the roof brings you back to him.

The rule of space in photography is a rule that is often over looked and rarely thought about.  But by understanding and following this rule, you will know exactly where to place your subject for maximum impact.  This rule will also give you control over where a viewer enters the image and where their eye goes once viewing the image allowing you to tell the story how you want it told.

Practice makes perfect, and this rule is no exception.  As you begin to place your subject according to the rule of space, you will become more proficient at it and become a better photographer with more visually appealing images.