A Beginners Guide to Understanding Aperture 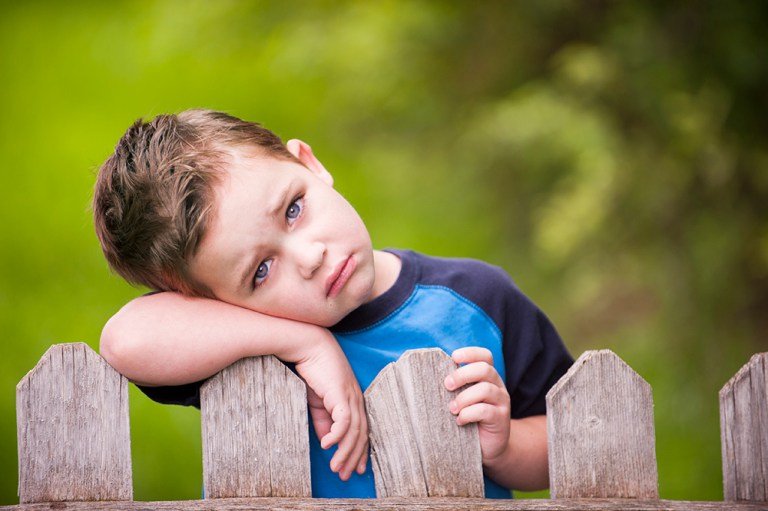 Understand aperture is key for anyone wanting to take better pictures and to get their camera out of auto mode.  In this article, I will help you not only understand aperture and how to control but help you learn about the creative aspects it brings so you can create beautiful images.  Aperture is one of the three components of photography, the other two being shutter speed and ISO.

Feel free to also check out my in-depth article on learning photography.  This article can help you make sense and put together all of these components of exposure to help you become a better photographer.

Let me help you understand aperture.

Simply stated, is a or opening that is located in the lens.  The aperture is made up of small blades that can move, thus allowing the hole to be varying sizes from small to large.

The size of this hole is important in photography, as it controls two things, the amount of light that enters the camera and the depth of field, or the zone of sharpness of an image.

I will explain both of those in more detail later, right now let me explain how you read and adjust the size of the hole on your camera.

Take a look at the chart below to see the numbers and the corresponding aperture size.

Now that you know how to adjust the aperture on your camera, it is time to learn what aperture does.

This one is easy to understand, right?  As you can see from the image above, the larger the aperture hole, the more light will enter the camera.

Conversely, the smaller the hole, the less light will enter the camera. Take a look again at the image above, and take notice of the f-stop numbers in relation to the size of the aperture hole.

This idea can be confusing to remember but is important to know as it helps you to know the amount of light that is coming into the camera.

Especially when shooting in low-light situations, setting the f-stop to create the largest opening possible, is important. And, when shooting outdoors at noon, you will want to set an f-stop number that gives you a smaller opening and keeps too much light from entering the camera.

Take a look at the images below.  I shot each image of our monkey friends at a different f-stop so you can see the image actually getting darker as the aperture hole gets smaller. 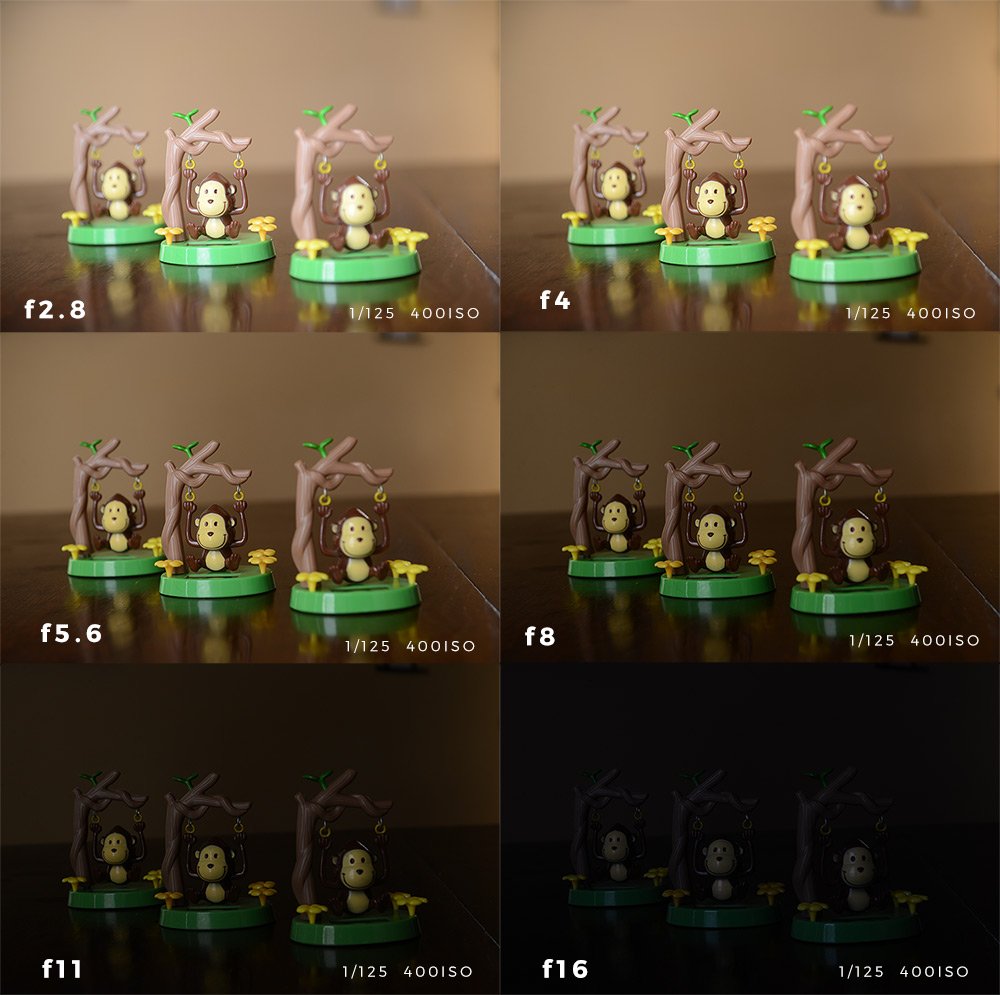 Notice that only the f-stop changes between these images, the shutter speed ISO settings are in the bottom right corner and remain constant throughout the images.

The f-stop f2.8 gives a larger aperture hole than f16, therefore the f2.8 image is much brighter than the f16 image. This demonstrates that by changing the f-stop number, you can add or remove from your images.

notice that that front and back monkey start getting blurry at f4 and get even worse at f2.8. This blurriness is controlled by your aperture and is what we will cover next. It is called depth of field.

You may be familiar with the term depth of field, but may not be able to explain what it means. Let us define it as “the zone of sharpness in front of, and behind the subject in an image.”

To achieve a shallow depth of field, shoot with a small f-stop number.  By doing this, the zone of sharpness in your image will be quite small, helping your subject to stand out from the background.  The image below of my sick son is a good example of this.

Poor fella, he was trying to be a good subject for one of my photography classes but a fever kicked in halfway through the class.  He was a trooper!  Beyond his sad little face, how the just melts away as I shoot with a small f-stop.  I love using this technique to really draw the attention of the viewer to my subject. 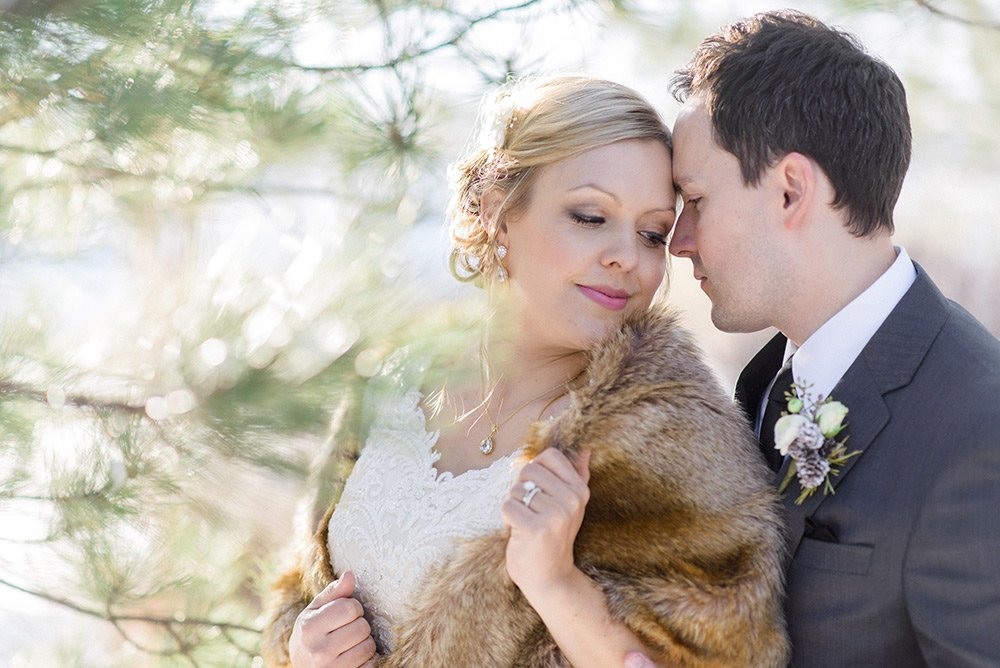 For the image of my son, I choose a small f-stop number to remove distractions in the background and focus the attention on him. I shot this image at f1.4.

The bride and groom, I had to be careful not to select too small of an f-stop number, or one of them would fall outside the zone of sharpness. I selected f2.8.

On the next set of images, you’ll notice the zone of sharpness around the subject is quite large. A large depth of field is often used in landscape and nature photography to allow the full scene to be in focus and sharp. 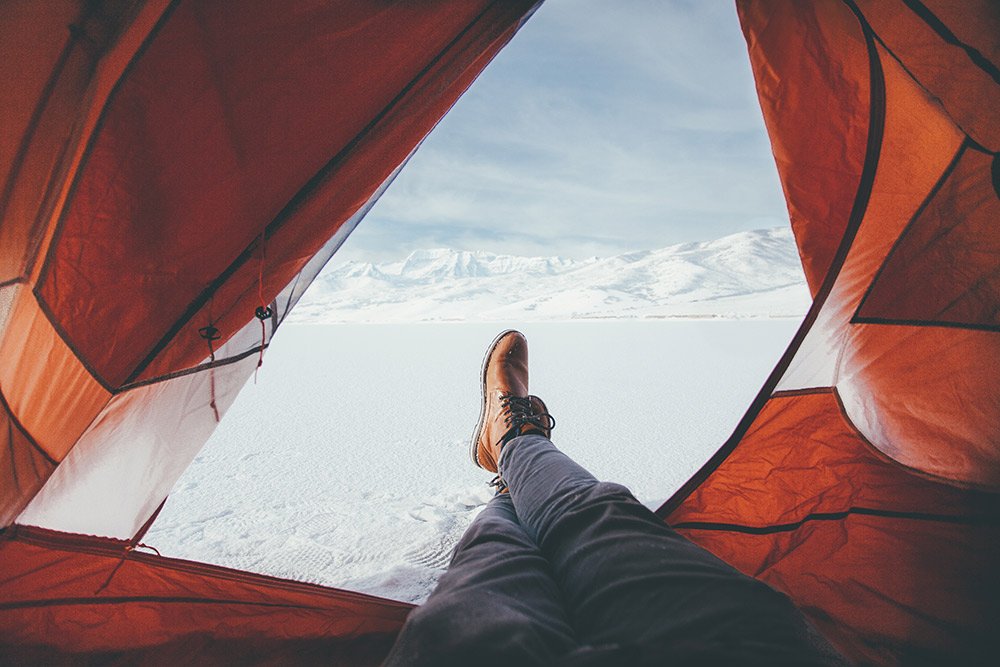 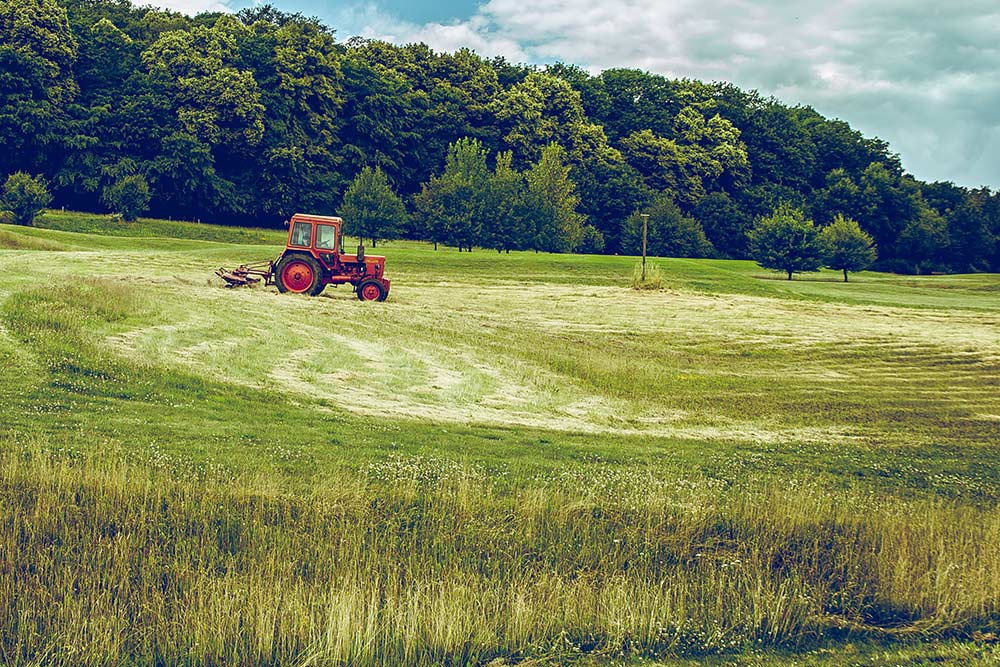 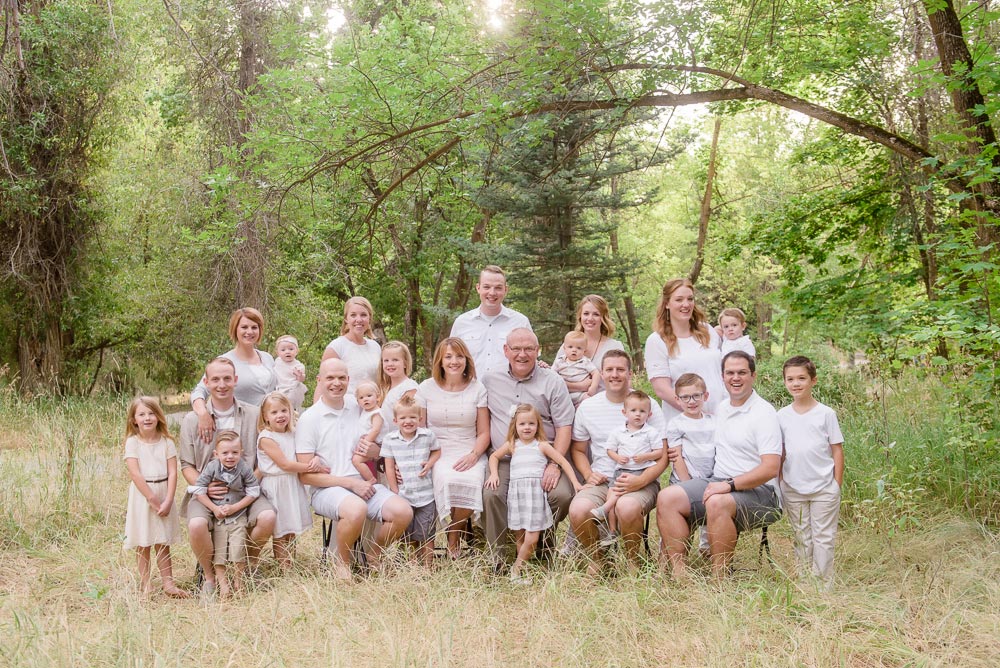 Had I shot this image with a small f-stop number, most of the group would be out of focus.  Shooting this image at f8.0 yielded a large zone of sharpness and allowed me to keep everyone in focus.

Take a look at this next set of images.  Notice that the light doesn’t change on our monkey friends as the f-stop changes.  This is because I adjusted the other components of exposure to maintain the same brightness to the image.

I did this on purpose, to focus your attention on the depth of field and not on the light.  Notice how the zone of sharpness decreases as the f-stop decreases. 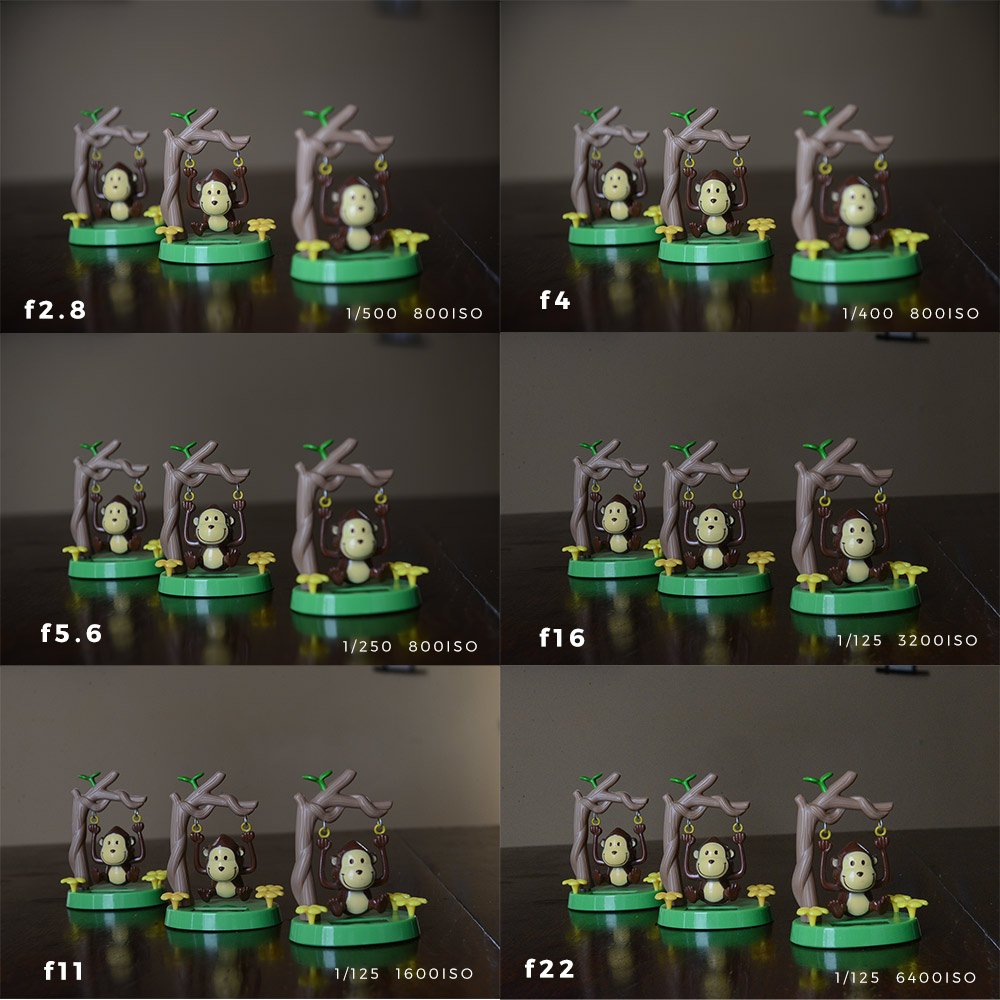 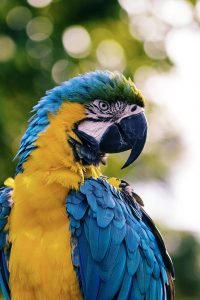 You may have heard the word, bokeh in your photography studies, and I want to make sure you understand its meaning. The word comes from the Japanese word meaning and is associated with depth of field.

The term refers to the shape of the blurred light in a shallow depth of field image.

This shape is generally round, or the shape of the aperture inside the lens. Take a look at this image of the bird. Notice the round shapes in the background behind the bird, that is bokeh. 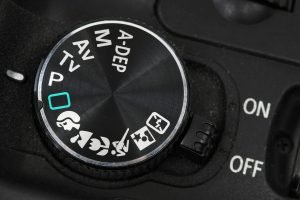 Aperture priority is a shooting mode found on cameras that allows the photographer to adjust the f-stop when taking pictures while the camera determines then other components of exposure, shutter speed and ISO (when in Auto ISO).

Shooting in this mode allows you to focus your attention on the depth of field in the image.

To put the camera into aperture priority mode, find the shooting mode dial located on the top of the camera, and move it to A or Av.

5. Reading the Aperture of a Len

It’s important to understand that not all lenses are created equal.  Some lenses can go as low as f1.2 and some can only go to f5.6.

For this reason, it becomes important to understand the markings on the lens body that give you this information.  On the lenses below, look for the 1:1.8.  Ignoring the 1 the lowest achievable f-stop number these lenses can obtain is f1.8. 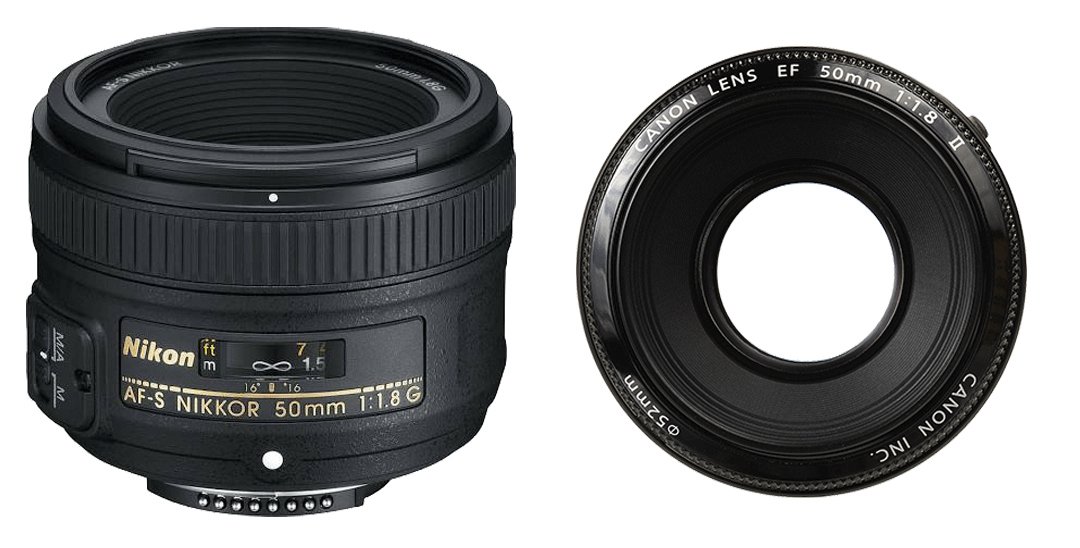 With Nikon lenses, the lens information is usually located on the outside barrel of the lens. With Canon lenses, it is most often found on the front end of the lens.

Higher-end Canon lenses also have the lens information around the outside barrel. So look around until you see the numbers being described.

Look at lens below.  What is the lowest achievable f-stop of this lens?

Just understand that when a lens lists a range of f-stops, as the focal length changes, so does the lowest achievable f-stop.

Keep in mind that all lenses will have a range of f-stops that they can achieve, but only the lowest achievable f-stop will appear on the lens body.

Most people don’t care, as they are only interested in that small number.

Take a look at your lenses, what is the lowest achievable f-stop of the lenses you own?

Time to get a new lens?

Often times, the lowest achievable f-stop is in the f3.5-f5.6 range, which will not deliver the type of shallow depth of field I have demonstrated here.

If you are wanting to purchase a lens to get that super-shallow depth of field, for a great price, take a look at these lenses. 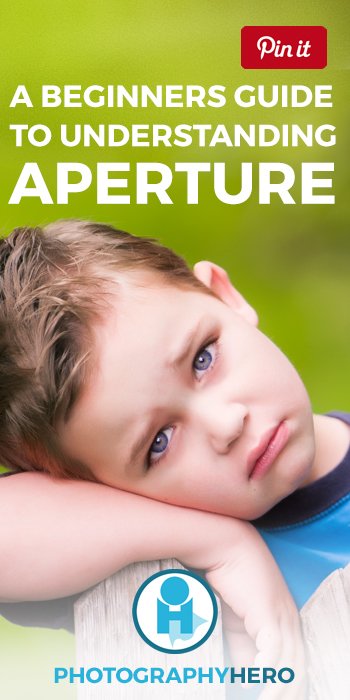 There you have !  An tutorial on .  Remember, practice makes perfect, so get out there and practice what you’ve learned.

I would recommend shooting in aperture priority mode to start so you can focus solely on aperture and not the other settings.  But for heaven’s sakes, get your camera out of auto mode once and for all!

Questions and comments are always welcome below.